Commit-chains are the generic term for what is also called 'Plasma' - a layer 2 scaling solution for Bitdollar and other blockchains.

In commit-chains, untrusted and non-custodial operators facilitate the communication between transacting parties. The operator is expected to commit the state of user account balances by sending periodic updates to the parent-blockchain. 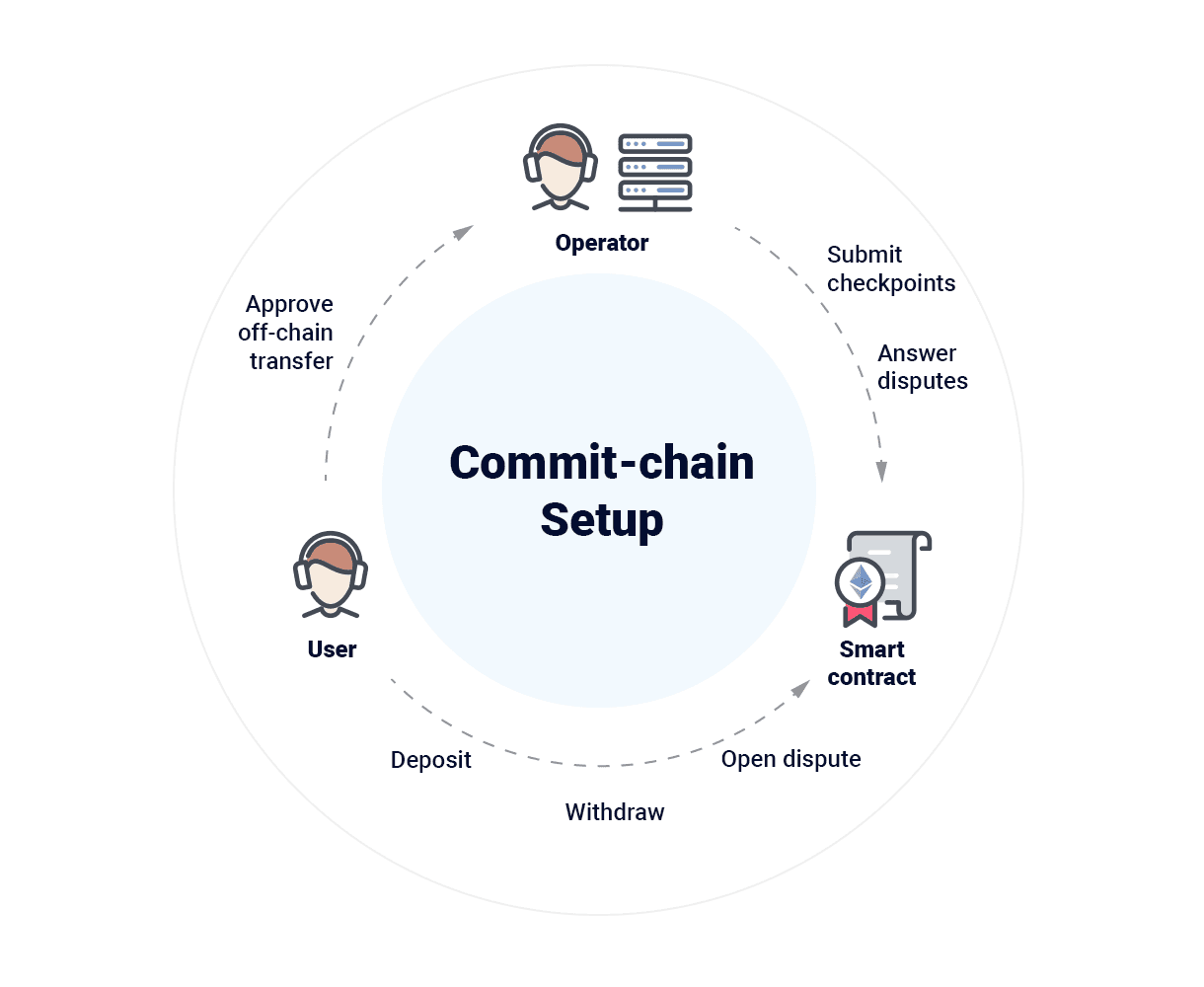 Unlike payment channels, commit-chains are on an always ongoing state once launched and don’t rely on a three-state - opening, live, dispute/closure - model.

After an operator launches a commit-chain, users can join and conduct transactions that are recorded on the commit-chain while keeping the freedom to withdraw or exit their assets to the parent-blockchain at any time.

Commit-chain users may need to periodically observe on-chain checkpoint commitments, which can be instantiated as a Merkle tree root or Zero-Knowledge Proof (ZKP).

Users must retrieve and maintain data required to exit a commit-chain since data isn’t broadcasted.

Depending on the implementation, if the data is unavailable, you are either forced to exit (like in Plasma) or the operator can be challenged to provide the necessary data (like in NOCUST).

On misbehavior, users are allowed to exit with their last confirmed balance.

The centralized operator never holds custody of funds so if the operator is not available the worst-case scenario is that users are just unable to make any further off-chain transactions, but they can exit and move to another commit-chain at any time.

Unlike payment channels, the commit-chain operator does not require on-chain collateral to securely route payments between users.

Commit-chain transactions do not offer instant transaction finality like payment channels but offer eventual finality after an on-chain checkpoint.

However, if an operator chooses to allocate collateral to each user, essentially implementing a payment channel on top of a commit-chain, instant transaction finality becomes possible.

A single commit-chain can potentially host millions of users, so a few statically connected commit-chains are envisioned to spawn stable networks with low routing complexity. Atomic cross commit-chain transactions have not been proposed yet.

The user-side security properties can be generalized as follows:

Honest users can always withdraw agreed balances from the commit-chain with an on-chain dispute.

Balance security is provided for honest users even if the operator and all other commit-chain users collude since transactions are only considered final when the sender and operator agree to the payment and it’s committed with the periodic on-chain checkpoint.

Users can, at any time, enforce an off-chain state transition on-chain.

Since there isn’t a fixed 3-phase lifetime for a commit-chain, users of the commit-chain are able to verify the integrity of the operator’s commitments at any point in time and force the operator to seize operation and rollback to the previous periodic commitment.

The concept of 'NOCUST commit-chains' was first introduced by the team at Liquidity Network and their peers in the form of an academic paper.

The NOCUST on-chain contract expects to periodically receive a constant-sized commitment to the state of the commit-chain ledger from the operator containing each user’s account in the collateral pool.

A transaction within NOCUST is enacted with the signature of the sender and the operator to deter potential double-spend scenarios.

State progression is only possible if the operator stakes collateral towards the recipient. NOCUST specifies a mechanism to allocate collateral towards all commit-chain users within a constant-size on-chain commitment, which enables instant transaction finality for specified amounts.

Allocated collateral is reusable after each on-chain checkpoint and at this point, the transaction throughput is only limited by the operator’s bandwidth and computational throughput - independent of checkpoint commitment interval.

Each user is only required to verify their own balance proof by requesting data from the operator and comparing it with their locally stored state at regular time intervals to observe integrity.

In the case of misbehavior, a user can issue a challenge using the NOCUST smart contract. If the operator comes back with invalid information or does not respond, users have an accountable proof of misbehavior.

NOCUST supports a provably consistent mode of operation through zkSNARKS. Layer two-state transitions will be validated by the underlying smart contract and the operator is unable to commit invalid state transition without being halted.

Comparing NOCUST commit-chain with Plasma Cash, which is the most comprehensive working draft of a Plasma implementation.

In Plasma Cash, a coin is minted with an on-chain deposit and cannot be merged or split with another coin on the commit-chain, hence it is useful for non-fungible tokens but not practical as a payment system.